Press enter to begin your search

Immersed in Ukrainian culture and history (and vodka)

The excitement has settled and there’s a keener attention towards the finer details of the hotel grounds: the fresh smell of pinewood, the pervading greenery and the richness of material with which everything is built within and without. From the wood used to make furniture to the ingredients used in every single local dish, everything is created with dedication to quality and excellence. One could easily fall in love with this city for what it is – a place densely packed with history and an almost perfectly preserved culture. In a world where westernization is growing evermore, it’s a relief to be immersed in pure Ukraine, where signs and posts read no English and people exclusively speak Ukrainian and nothing else.

Our sightseeing tour began at the monastery of Kiev Pechersk Lavra, nearly 1000 years old. Shrines, beautifully decorated walls and paintings of saints and martyrs are in abundance around the pious priests and nuns. I detest religion. However, one can’t help but be in awe at some of the marvelous structures that religion has resulted in overtime. Unfortunately, my attention during this part of the tour was more focused on the cynical, piss-taking of the Christian traditions, which the groom and I, both atheists, could not help but do (apologies to the sensitively religious out there).

At one point, standing inside a very quiet building within the church grounds, the groom had made a joke which made me laugh very loudly, obviously upsetting a nun who was doing her prayers. “We should probably be more respectful,” I said to him, to which he replied “Is she fit?” And, right at that moment the nun turned around, with ghastly gargoyle-like facial features and in my fright I laughed even louder. Sorry folks, the temptation to upset the imaginary gods are far too strong to resist.

More photos from the monastery: 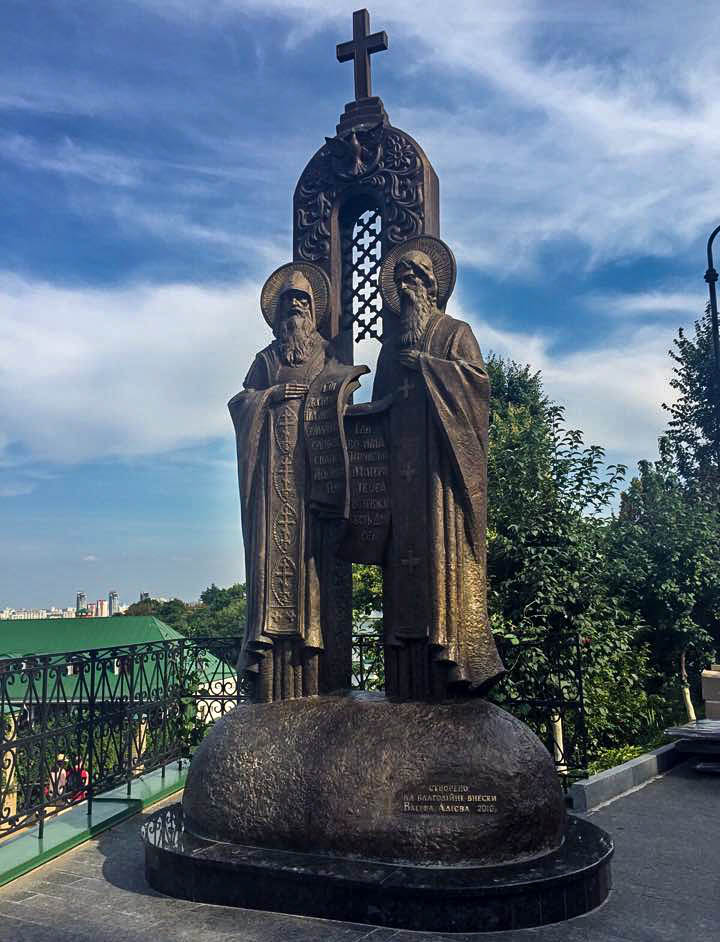 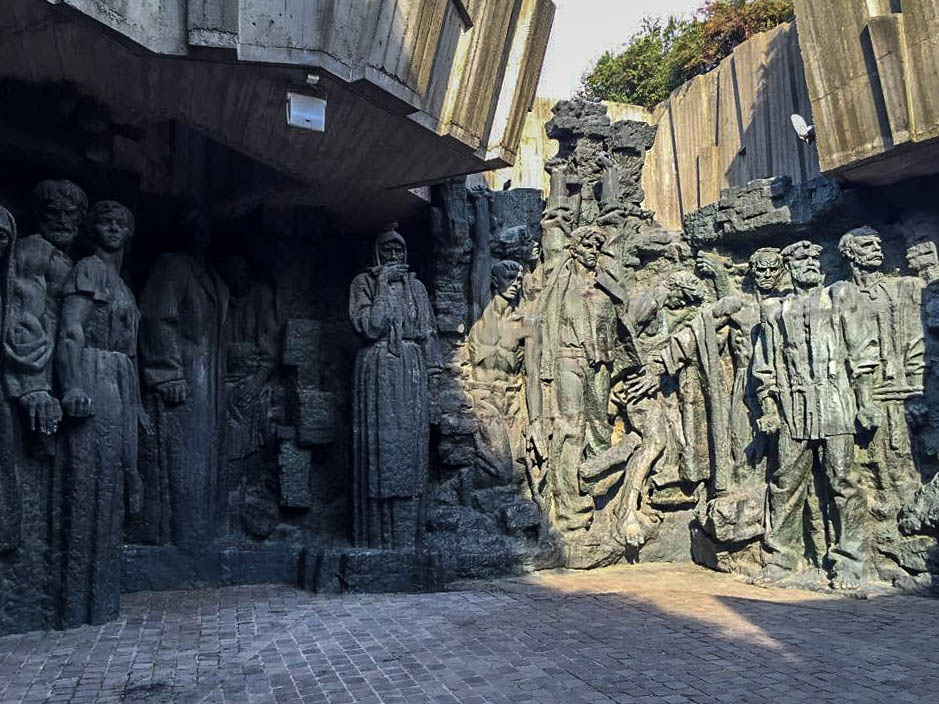 Embedded on stone: the memories of soldiers from Ukrainian’s dark past

The most incredible part of the church grounds was the underground tunnels, about 300m long and packed with around 50 (I think?) naturally mummified saints wrapped in beautiful textile and preserved within glass coffins. The tunnels are so small and dark that groups must walk through in single file and holding candles. Each mummy would have been over 200 years old. We found our blasphemous jokes silenced at this moment, as we found ourselves walking through what is touted as one of the Seven Wonders of Ukraine.

It amazes me how solemn and sad all the priests and nuns who walk the church grounds seem to appear. After all, isn’t being “closer to God” supposed to be a happy experience? Unfortunately the recent history of Ukraine is not so different when compared to the expressions on the faces of the religious. Within 400m walking distance is the awesome (and I mean, really awesome) statue: Mother Motherland, Kiev. This huge monument, standing around 200m above the ground, was the first thing to catch my eye up during the drive to the hotel on the day I landed in Kiev. So amazed by its glory, I had asked the non-English-speaking driver what it was, to which he angrily yelled out, “MATHA-FACKER!!!”.

Later on I would find out that the statue was a symbol of the Soviet Union (from its days as part of the USSR) and that the lady was thought by some to be a shemale. Hold on, why shemale? Peoples’ reasonings seem to differ but from my understanding of what our lovely tour guide Marina told me, it was created as a shemale-like figure to represent the power of the Ukrainian people, as if to say “our men are strong but our women are just as strong too, so don’t f**k with us.” Under the statue is a museum, which we didn’t have time to see. However, the history of the place is so densely filled with sadness and tragedies of war, one single blog post wouldn’t be sufficient to cover even the slightest bit of it: you have to go and see it for yourself. The most startling thing about the whole experience was how recently some of these atrocities occurred. So recent that a looming cloud of confusion still pervades the country as to what really happened, which reminds us that we are still very connected with its social and political history.

And now the fun starts…

We settled our tired bodies in a fantastic restaurant organised by the lovely bride, Anya. It was called Tsarskoye Selo and served the best local food I had experienced in the whole trip. The most memorable part of the experience was the culturally iconic Red Borscht Soup, which amazingly comes with a vodka shot. If you ever try it, make sure you have a Ukrainian friend to teach you how it’s supposed to be done!

The weirdest (and coolest) soup dish ever, complete with a shot of vodka – Ukrainian style 😉

The drinking continued back at the hotel until late into the night and copious amounts of vodka was consumed. They weren’t kidding about the Ukrainians: they do drink a lot of vodka.

This error message is only visible to WordPress admins